It is well known that Donald Trump is an unusual-- not to say strange-- person. A striking instance comes from images of Trump just after he was elected President, the night of November 8, 2016.

One might expect his face would show happiness, elation, or perhaps surprise. In fact, what we see in something entirely different. 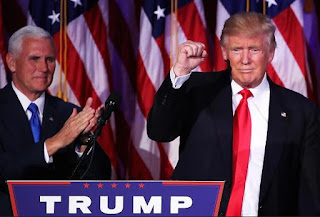 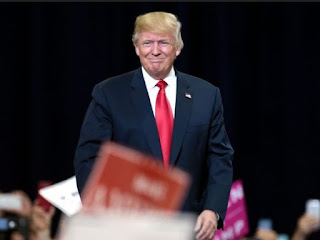 Nassauer uses the method of analyzing the facial expression of emotions developed by psychologist Paul Ekman. Based on decades of research in many cultures around the world, Ekman concluded there are six basic emotions that are visually recognized everywhere, and thus are universal among humans. The facial muscles that go into these emotions are the same, although persons can try to inhibit or mask their emotions by deliberately controlling facial muscles and body postures and gestures.


Thus we can analyze both spontaneous emotions and the attempts at emotional self-presentation or deceit. On the whole, people tend to think of emotions as expressed in the mouth-- smiley mouth, sad mouth, etc. But the mouth has the muscles which are easiest to control, and this is where we do most of our emotional  pretences and performances.

Emotions are expressed on three zones of the face: the brows and forehead; the muscles around the eyes; and the lower face. The eye muscles are hardest to control consciously, and these are the strongest cues to the genuine emotion. Thus put-on or faked smiles are made with the mouth, but the eyes and brows give them away.

Sadness is shown in the face by the following clues:

-- The inner corners of the eyebrows are drawn up.

-- The skin below the eyebrow makes a triangle, with the inner corner up.

-- The corners of the lips are down, or the lip is trembling.

The following photo shows the brows and eyelids in the sad face, while the lower part of the face is neutral: 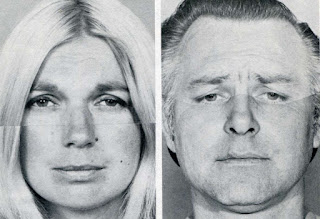 The next photo isolates the lower face, while the brows and eyes are neutral. There are two ways that sadness appears on the mouth: the left photo shows the corners of the mouth turned down. (This never happens as drastically as the cartoon-caricature of the sad mouth; a small downturn is sufficient to convey the expression.)

The right photo shows lips which are trembling and tight, an unconscious effort to control the sounds of grief. 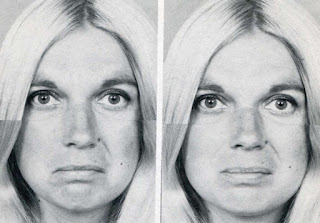 The next set of photos shows sadness in the full face, with the two different sad mouths on left and right. 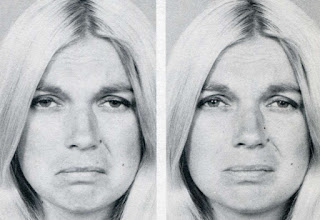 Close-ups of Trump's face as he acknowledges his election match the sadness clues for brows and eyes. The photo on the left shows slight sadness in the mouth as well. The photo on the right suggests an ostensible effort at a smile (mainly from the diagonal naso-labial folds that make a triangle shape from the nose to the corners of the mouth). But on the whole this is the tight-lipped, tense mouth, an effort to control one's emotion. 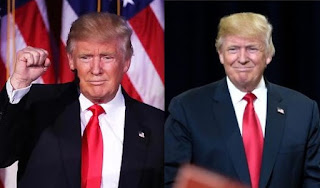 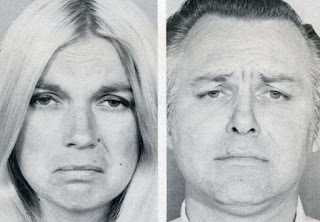 Sadness is expressed in different degrees: from left to right, subtle, mild, and strong: 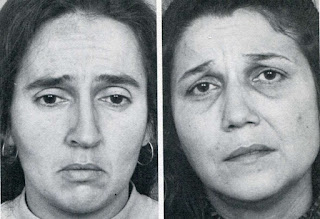 Sadness can also blend with other emotions. The following photo blends sadness and fear: 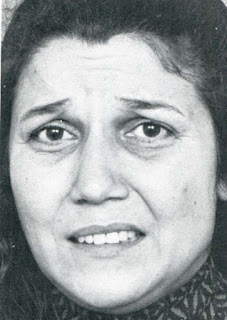 But this, for the most part, is not Trump's expression. The following pair shows a blend of sadness and happiness on the left; the right is a close-up of Trump's face as he appeared on the stage with his family: 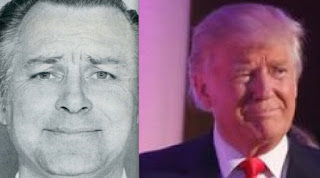 Here one can see clearly the contrast between Trump's face and the happiness show by his family members: (Melania Trump maintains her professional model's expression.) 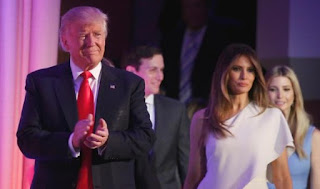 The following photo of full-face sadness shows sad eyes and brows extremely well, and also the characteristic lines in the center of the forehead made by the upward pull of the inner eyebrows. This is known as the Omega face, after the Greek letter. 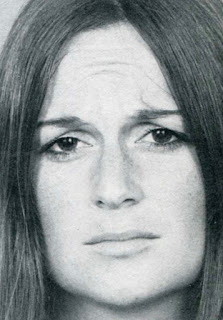 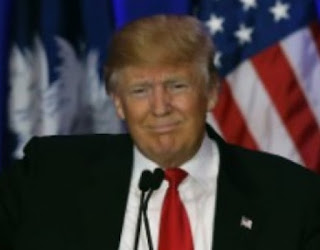 Why is Trump sad, just when he makes his first public appearance after being elected President? Later he admitted privately that he had not expected to win, given the final polls. He was surprised by the result; but surprise is not what we see on his face. Surprise is a rapid emotion, and there was plenty of time to get over it during the course of the evening as the results came in.

The sadness is peculiar to Trump. It is not shown on the faces of his running-mate Mike Pence or of his family. Almost certainly it is an unconscious emotion.

My conjecture (which agrees with that suggested by Anne Nassauer) is that Trump was realizing his life is going to change, drastically. He has been a free-wheeling entrepreneur all his life, the head of a closely-held business. He has run it with quick decisions, exerting personal control, relying on family members and trusted followers. It must have dawned on him that he was entering an entirely new kind of organization: much more constraining, more bureaucratic and political pressures, less freedom to buy and sell, hire and fire at will.

I am not suggesting that these thoughts were going through his mind. Trump's pattern is to put his thoughts almost immediately into words, spoken or tweeted. But our feelings are a trajectory going forward, against the background of our past. Donald Trump's first reaction to facing the public in his new role as President-elect was sadness. Sadness for what he was leaving.

See the giveaway details at Goodreads.